How to avoid frozen pipes and valves with Heat Trace

Is your facility facing issues from extremely cold temperatures or the elements of mother nature during winter? Heat trace cables and assemblies can decrease downtime, increase safety and ultimately save your water pipes from bursting. 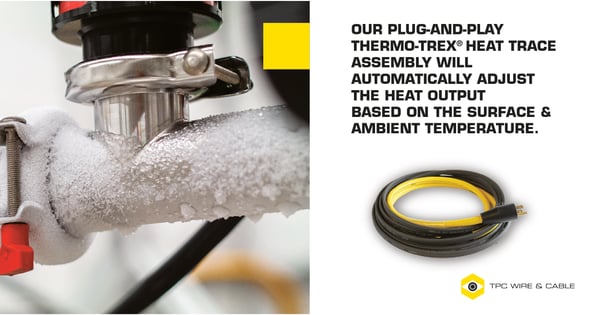 Why frozen water will burst your pipes

Water that freezes in a piping system can do damage beyond clogging the system and shutting off flow. Ice takes up more room than liquid and in a confined space like a pipe, it builds extreme pressure from within that is enough to break the pipe and all related valves and fittings.

The damage leads to unexpected and unnecessary cost from replacement parts, labor, and downtime. Avoid the hassle with these tools:

Thermostatically Controlled Heat Trace is a simple unit designed to provide freeze protection or de-icing of pipes and valves. It also has uses for process control applications such as controlling viscosity. Simply plug it in, control the temperature with the adjustable thermostat, and wrap the heat trace tape around the pipe or valve. The tool is nicely suited for those instances where you need to spot-heat a pipe or valve to keep it from freezing when temps fall.

Heat Trace Assemblies are designed to provide freeze protection using a self-regulating heating cable that automatically adjusts the output based on the surface and ambient temperature. The assembly includes a power cable and a plug spliced into the heat trace cable with a waterproof seal. Simply plug the assembly in and then install it on your pipes or valves. These assemblies help in applications where a more permanent solution is needed for protection or where heat trace need exceeds the lengths of the Thermostatically Controlled Heat Trace mentioned above.